The long awaited month of June was supposed to be much more than a summer vacation for me; it was meant to provide a break from the two-year-long series of weekly exams that had jeopardized my generally carefree lifestyle. By first week of June when the long string of unending exams finally came to an end, I was at the bottom of my energy levels.

The upcoming good time was ushered in by some quality movie time with the documentary, “Sachin: A Billion Dreams”. It rejuvenated my exhausted mind and set me up for the tour to Uttarakhand, the next day.

We landed in Delhi and it felt like entering in a blast furnace. Hyderabad is usually very hot too but the Delhi heat seemed to be a different beast. As we waited long for the cab to arrive through the swirling traffic, drops of sweat appeared on the brow but in no time vaporized in the warm, polluted air around us. In a short while we were riding along the wide roads of Connaught Place. The white, colonial buildings, flashy shops of ritzy brands, opulent restaurants – all contributed to the rising feeling of awe in me. Soon, I noticed a very distinct transition in the surroundings. The roads became narrower and crowded, the walls of the buildings along the road were hardly visible. The flashing hoardings and and posters crowding in gave rise to a claustrophobic feeling! Pahargunj was an eye-opener with its erratic traffic and the diversity of people – hippies, Koreans, stall owners, cobblers, beggars and even stray dogs and the overall congestion was overwhelming. The two localities were adjacent yet so contradictory in appearance and brought home the unique metropolitan character of Delhi; one was classy while the other so narrow that it was barely walk-able.

In the evening we travelled to Rohila Sarai, again a locality with completely different character. We boarded a train, scheduled to reach Dehradun next morning. We were accompanied by my uncle, aunt and my two lovely cousins who were very disappointed to find their favourite Ena didi so drained out. The train reached Dehradun about an hour and a half late, reminding us about the delays which have become the hallmark of Indian Railways. I had expected Dehradun to be a very comfortable and pleasant place; surprisingly the weather was quite stifling. Though the Sun God was not very furious the heat was suffocating. We rented a car for five days and started off for Dhanoulti, a hamlet in the lap of mountains. 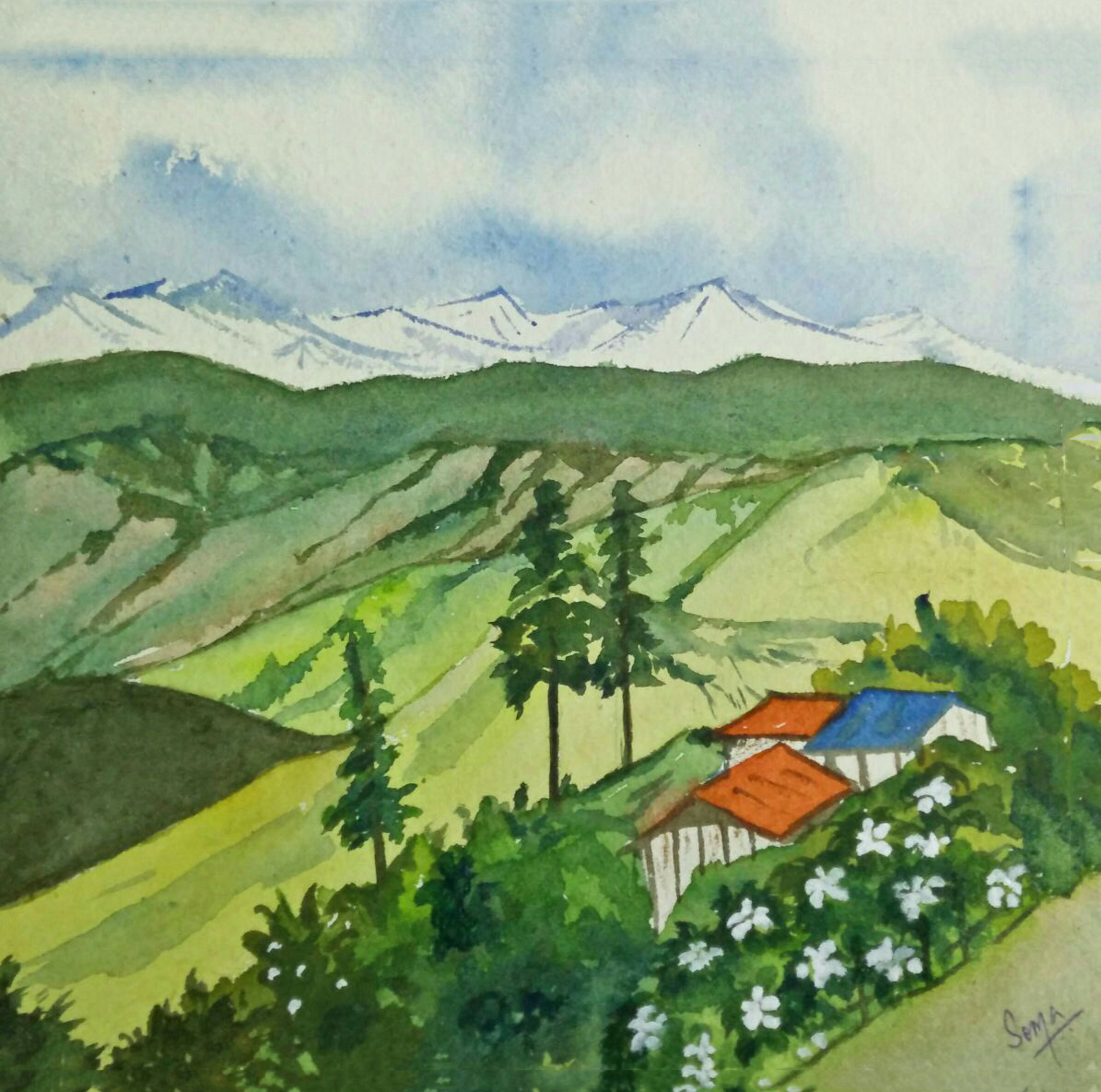 I hate travelling by car, especially if it includes mountain trails and an abundance of hair pin bends. In addition, our driver’s amazingly rash driving skills made me feel giddy and nauseated. The world around me spun and my tummy churned and tried to get rid of its contents. A three- hour-long drive seemed like a lifetime when you have such a phobia for hilly roads. Our destination, a secluded resort tucked away in the mist, was a welcoming sight. The interplay of clouds and sunshine could dissolve any trace of uneasiness in the mist. Three bright cottages with red, sloping roofs welcomed us with warm refreshments. The dark green conifers encapsulating the surrounding hills gradually faded into the advancing veil of dusk. This was indeed refreshing for all of us.

Mornings in a city are filled with a lot of cacophony, noises emanating from the kitchen utensils, honking of cars, shouting of street vendors; all these drown the chirping of the very few birds that exist there. Dhanoulti offered a different view of dawn – dew drops glittering like diamonds, crowning

the emerald coloured grass blades, the thick and thin fog playing hide and seek over the terrace farming plots along the hillside, a brief sunshine interrupted by a gentle drizzle which in no time turned into a brief downpour, the loud pitter-patter of raindrops on the tin roof, and the chirping of numerous birds generated a symphony which can be compared to none. Gradually, the rain stopped and the morning sun peeped out with a subtle brilliance that brought warmth to my soul. My heart hummed “ Sunshine on my shoulders makes me happy, sunshine in my eyes can make me cry, sunshine on the the water looks so lovely, sunshine almost always makes me high…….” A wonderful song for a wonderful place!

After a filling and delicious breakfast, we started to visit nearby places like the Eco Park, Kaanataal, Sarkunda Devi Temple. The temple tour included a 2.5 km long trek, through steep steps. I could not gather the courage to climb the steps, so I stayed back to enjoy the landscape below with my exuberant sisters. There was a hilly spot right where the steps to Sarkunda Devi Temple started. There were sheep grazing with a couple of sheep dogs and a shepherd keeping guard. The fresh air, the tall trees and the land under step cultivation stretching down the hillside, brought an imagery alive to me. It reminded me of the lines, “Heidi, was it this blissful sight that you witnessed everyday? Is it for these lovely sceneries that you longed to return to your very own Swiss hills and your very dear Peter?”

Next day we came down to Benog Pines Cottage which was locked away amidst the thick woods in Rajaji National park. This National Park spans over a very large area between Haridwar, Rishikesh, Dehradun and Mussoorie. We entered the park from the Mussoorie side. The road to our cottage was very bumpy, more of a narrow trail through thick vegetation. The last 750 metres had to be covered on foot since the road turned out to be unfot for the car. A few trickling streams traversed this pebble strewn path through the forest. Leeches were in abundance in these little streams which frightened my little sisters very much. The experience of a leech sucking at my toe was a new one for me. I literally didn’t feel anything! On our arrival we heard that a leopard had strayed into the small clearing in front of our cottage just two days back!! This piece of information was thrilling but at the same time scary, particularly to my cousins. Afternoon faded into evening, and the dense thickets were filled with various sounds; crickets chirping, parakeets screeching, koel’s cooing and a medley of other unique sounds. As dusk approached an uneasy feeling gripped my sisters and me – was the leopard watching us from somewhere within the bushes?

The following day, we visited the Kempty Falls which was close to Benog. We started with a clear sky but by the time we reached Kempty there was a very heavy downpour along with sleet. The surroundings and the road were barely visible. We grabbed this opportunity to enjoy hot and delicious food at a roadside dhaba with an amazing view of the Kempty Falls below. The steam from the mouth watering paneer bhurji, the mist from the rain and sleet mingled and created a beautiful ambience for us. We returned to our cottage in the woods with an unforgettable experience in mind.

On the penultimate day of our trip we visited Mussoorie, a town of which my mind had a vivid imagery from the numerous books of Ruskin Bond. His descriptions had painted a very serene picture of the Mussoorie town in my mind. However, Mussoorie turned out to be one bustling with tourists, shops, and hotels. Though very congested it had an altogether different vibe. My excitement reached its peak when my uncle informed me about my favourite author’s Saturday visits to “The Cambridge Book Depot” located on the Mall Road of Mussoorie. Incidentally, it was a Saturday! We walked down the road and entered a fancy restaurant called “ Tavern”. Don’t judge a book by its cover, appearances are often deceptive! So are reviews available over internet. The service was quite poor and the food was not impressive either. Anyway, there was a lot of happiness awaiting us after this disappointment. It was time to visit Ruskin Bond. We stood in the queue that had formed outside the bookstore, eagerly waiting for our turn to interact with my favourite literary icon. Meanwhile, I noticed the crowd that had gathered. There were people who had not read even a single book written by the blue-eyed author, yet they had gathered there to take selfies along with him. When my turn arrived at last, my heart kept pounding. Despite his advancing age he was as young at heart as ever. He was wearing a bright yellow sweater which complimented his rosy cheeks and greyish blue eyes. His English accent still rings in my ears!

“ Sir, I am a huge fan”, I murmured. He smiled gently and took the book into his hands and autographed it. I had bought The Room on the Roof, his very first book that he had written at the tender age of seventeen and which brought to him the prestigious John Llewellyn Rhys Memorial Prize in 1957.

My hands were trembling while I put forth my question timidly. “ What are your upcoming novels, sir?” He answered that his recent novels included his autobiography- Lone Fox Dancing and another book titled Looking for the Rainbow. The latter revolved around the very few days that he had spent with his dad. I purchased these books immediately. My interaction with this very special person will remain an everlasting memory.

Carrying the newly-purchased books close to my heart, we walked down to Keventers to get some milkshakes, If any of you ever come across this franchise, do try out Caramello – you will love it! The day was coming to an end and so was our trip. We shopped a little which is an unavoidable tendency of tourists. At dusk we took a few photographs at “library chowk” which brought our day to Mussoorie.

The usual giddiness and nausea accompanied me on the return journey. Dehradun Zoo could have been a refreshing change. But the sparsity of animals disappointed us. There were a few birds, two leopards and two crocodiles. With the ambience of Benog sanctuary fresh in mind I recollected the famous Bengali saying, “Banyera bone sundor” meaning that wild animals look best in forests. In a day’s time we were back to Hyderabad, back to routine, back to life as we live it!

A Lesser Known Story Of A Glorious Triumvirate
September 22, 2017