That was the sound of Bagha slapping his forehead, not in frustration over the misfortunes that Goopi and Bagha had been facing ever since they set foot on planet Prasinos, but to kill one of the humongous, blood-thirsty mosquitoes that had been swarming around his head for quite some time.

But it was far better to be attacked by these gigantic anopheles than fleeing from the giant pterosaurs that had torn apart Bagha’s dhol; not to mention their narrow escape from the vicious dinosaurs that had chased them and held them captive in a cavern.

As you may remember Goopi Gyne and Bagha Byne, sick and tired of the monotonous life on disenchanted Earth and eager to find a new and magical home for their beloved Bhooter Raja, had set out on an expedition to the newly discovered Planet Prasinos. But Prasinos, though a beautiful planet with abundant greenery was a precarious place to live in, with danger lurking at every corner.

And so here they were, Goopi and Bagha held captive by the vicious Troodon, a breed of advanced dinosaurs. But they were all the more distressed as their magical powers had weakened. They were unable to mesmerize with their enchanting music as the destructive pterosaurs had wrecked Bagha’s dhol. Also, they had lost their magical shoes in the melee while escaping the dinosaurs. Prasinos had turned out to be a dangerous world of the biggest, the heaviest, the meanest, and the tallest dinosaurs. These creatures really had it all covered, and whatever ecological challenge they had faced on earth, they were able to deal with them at Prasinos with  sufficient ease. Needless to say, Goopy and Bagha had reached Prasinos, when these creatures were the predominant form of life and they always seemed to live in fear of being attacked by a T-Rex or triceratop. But all this did not dishearten our Goopi and Bagha and they still strongly believed in the magical powers of Bhooter Raja.

And so life on Prasinos would have continued to be as distressing had Baghada not accidentally discovered something strange. Once, Bagha was playfully drumming against a huge rock in the cavern with his dhol sticks which had been left tucked in his cummerbund when he lost his precious dhol. Dhang kur kur, dhang kur kur, went the beats. Goopi was humming a tune or two likewise, suddenly their attention was captured by the Troodon guarding the entry to their cave. They realised that whenever they would begin singing, the creature began tapping his feet and broke into a jig. Again, Goopi sang, Bagha drummed and the Troodon swayed and danced.

In a few minutes, all the dinosaurs joined him and turned the well guarded cavern into a lively venue for one big dance party. Heavy as they were, their feet went ‛plonk!’ ‛plonk!’ and swayed their heads enough to make up for the lack of graceful movement. Apparently, they loved good music just like the subjects of Bhooter Raja. 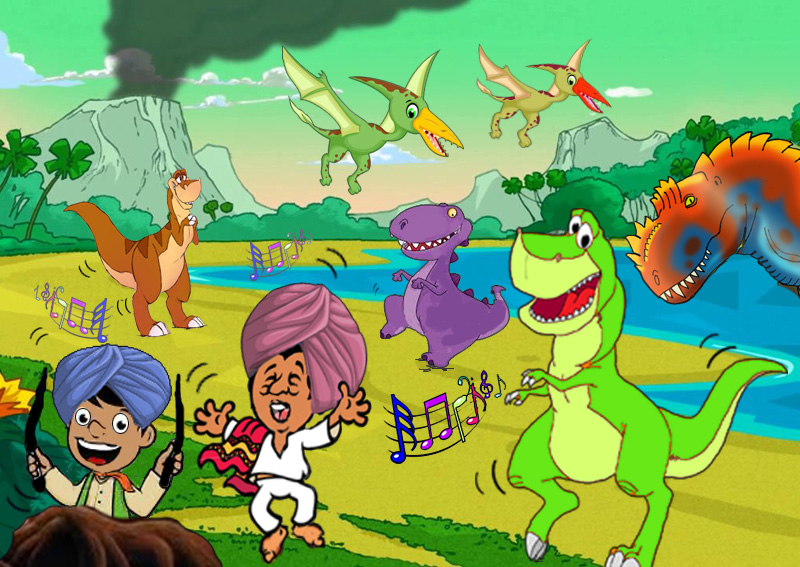 “Hurrah! The magic is not lost. The magic of Bhooter Raja once again prevails! Hurrah! Hurrah!” Goopi and Bagha shouted in a sing song voice, ecstatic with joy on having rediscovered their power. Bhooter Raja’s boon of mesmerizing an audience with music had materialized in a unique way at Prasinos. Their music now had the magical power to make anybody dance with joy. After initial euphoria was over Goopi and Bagha took the opportunity to escape from the cavern as the Troodans snored and slept after all that tiring Zumba performance. Eventually, the dinosaurs, though a constant menace with their tendency of devouring majority of the inhabitants of the planet whenever struck by hunger pangs, turned out to be a fun loving species – often breaking into a foxtrot, the moment they heard the magical music of Goopi Gyne and Bagha Byne.

Meanwhile, scientists and palaeontologists who had reached Prasinos began their research on the evolution of life on Earth based on the life on Prasinos. Little did they realise that everything is just one of millions and millions of natural experiments occurring in our vast universe.

There were quite a few adventures waiting for Goopi Gyne and Bagha Byne at Prasinos, and yes, they also managed to retrieve their magical shoes from the mouth of a T-Rex who was desperately trying to get a bite out of the sole of the beautiful embroidered pairs – a gift from the Bhooter Raja. Finally, convinced that Prasinos untouched by the pollution and the greed of mankind was perfect for the revival of the magical world of Bhooter Raja, Goopi-Bagha used to telepathy to extend their invitation to the king of ghosts. He was indeed pleased with the success of Goopi and Bagha and at once presented Bagha with an identical magical dhol and replaced their threadbare shoes with brand new ones. And needless to say these days, whenever our dear Bhooter Raja felt lonely and weak on Earth he rushed to Prasinos to find solace amongst the dinosaur menagerie and recharge his magic.