Daniel Stanford was a detective. He was the best detective in the world. He had solved many crimes prior to his joining the FBI. It was said that he could look into your eyes and extract the truth. He solved most crimes in 6 hours. But nothing could prepare old Dan for the crime I am about to commit.

I knew Daniel as a child. We went to the same school. We were the class toppers. But I bested Dan at everything.

Dan was amazing at solving riddles.

Each day when the class teacher arrived, as a rule, he would ask us a riddle.

The solution was related to the topic he was about to teach us.

“Stanford!” The teacher would call out.

Dan would give clear and crisp answers to the riddle. And gleefully, the teacher would take cue from his answer and continue on the topic. The entire class, including me, would ask Dan riddles and even implore him to find out where they had misplaced their money, lunchbox or some stationery. And Dan would always successfully trace them.

The first murder mystery he ever took up, unfortunately, was that of my father’s.Daniel’s uncle was in the local police. Daniel would often accompany him to solve burglaries. When my father died, I was 15, Dan 16. My father was found dead in his bedroom. A bullet had gone through his heart. My mother was out of station. The room where he was found dead had all the windows closed and the door ajar.

I repeatedly pleaded that I didn’t kill my father. The fingerprints on the gun were all mine because I used it to kill birds. They didn’t believe me, and sent me to police custody. And then to rehab. I had mixed feelings for old Dan prior to this incident. But I loathed him completely after this.

I am grown up now; out of rehab and ever ready to murder him. I am Douglas Morgan, a vicious murderer. I have been known to commit crimes all over the world. The world is on the lookout for me. I am known to tell lies no one can detect.

The plan is to poison Dan’s tea. He drinks his tea around 4:30 p.m, everyday. So I scheduled an appointment around that time. I took a cab and then reached his office headquarters.

My gang has developed a colourless and odourless liquid poison. It has very less density. So, if the target decides to add sugar to his tea, already laced with poison, the sugar dissolves without a problem.

The tea was prepared by Dan’s personal cook and then left on a serving tray, everyday. The tray was to be picked up by Dan’s assistant. I sneaked into the serving area before Dan’s assistant picked it up and added the poisonous liquid.

“Hey, Dan! I have been waiting to talk to you for a long time. It has been ten years now since you got me arrested. I want to tell you that I didn’t kill my father, and I want to know who did it, since it wasn’t me,” I replied putting on an innocent look .

“Isn’t it obvious? I killed your father.” he boasted.

“I detect the truth through my eyes. You speak the truth, so I will speak it too. I killed your father.”

“Well, I sneaked in to your house at midnight through the living room window, stole the gun with which you used to shoot birds and killed your father. And need I mention that I wore gloves to avoid leaving my fingerprints?”

“What if I told you that I committed 75 per cent of the crimes I solved?”

“Then you tamper with the evidence and solve them to gain publicity?”

“Let us drink some tea.” I offered.

“Did you poison my tea?’ He shouted.

He shouted “GUARDS” but kicked the bucket midway.

I escaped from his office through the window.

I had just committed the biggest crime Dan has ever known.

For once the lie detector failed, miserably. 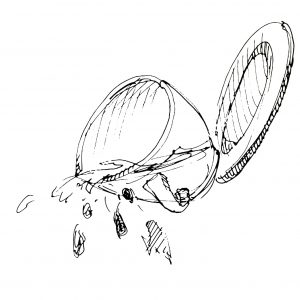