Buddy crawled fast and steady through the corridor and reached his ‘unsun. To us the gait might have seemed funny, but the residents of K1 around Buddy all crawled in the same way. The once marbled floor was now unrecognizable after a century or so of encroachment by humanity. The throng of survivors had muddied and sullied the once hallowed halls of what was now known as K1. Buddy gathered all the belongings that he had on this grey planet and tried to go to sleep. The ‘unsun was a prized crawlspace and he knew he was lucky to still have it after his ‘ma and ‘ba had jumped the air. He tried to sleep despite the noise around him. The little harrys and emmas were crawling all over K1 like little ants. Food gathering ants. Moss and mushroom grew in the underground and the harrys and emmas fought amongst each other to take the food prize back to their ‘mas and ‘bas. Their old families in all the nooks and crannies in K1 waited for their harrys and emmas. Each family fought each other for space and survival.

Buddy tried to sleep despite the noise around him. There was an uneasy feeling in his stomach and heart. He had been noticing lately that the little harrys and emmas were little no more. They had been growing taller and stronger. When they crawled they looked like a gang of wild animals that his ‘ma used to tell him stories about. Suddenly Buddy realized that there was a silence around him. The complete dearth of sound was more fearsome than the previous animal-like din. Buddy tossed and turned for some time and then just gave up on sleep for the night. Buddy decided to go and see what the harrys and emmas were up to.

Buddy crawled out of the space and hurried forward on his hands and knees. He crawled out and peeped into every nook and every cranny and crawlspace but there was no sign of a harry or an emma. Buddy went to the next level in search of them.

Every level of K1 had a different clan of survivors and usually no one went where they didn’t belong. There had been a strict law from the time of the ‘shroom in the sky, which changed to a laxer social rule after the war of levels.

Buddy wasn’t used to crawling up the stairs, but he thought to himself, if the harrys and emmas could do it, so could he. Unused to stairs, Buddy made a slow work of it. By the time he reached level 2, there was no light anywhere. All Buddy could hear around him was a few low growls and a strange slurping noise. The noise was so inhuman that even a post-apocalyptic man like Buddy had shivers up and down his spine. There was an eerie silver light a little far away. Buddy slowly crept to the silver light and a crawlspace that smelt like death and decay. And of madness.

Buddy reached the silver light and slowed down. From close by the silver light was bright. Too bright for the ground level Buddy. He squinted and waited as his eyes adjusted. By the time he could see again, he saw a tableau of monstrosity in front of him. At first Buddy couldn’t understand what he was looking at. There was a ‘ma on the floor and red was oozing out of her chest and stomach. At the stomach, all the harrys and emmas were feasting. There was slurping and chomping and scratching noises. And there was giggling. The smell of death was strong here. The smell of madness and hysteria was even stronger.

Buddy hid behind the blue, rotted ‘nekin and looked at the horror movie in front of him in terror. He looked back at the face of the ‘ma. She was not yet dead. She was living and those little monsters were feeding on her and growing bigger and stronger than the rest. They were eating her as she lived. The ‘ma was looking straight at Buddy now. Buddy wanted to reach out to her and help her, but he was stuck to his spot. The ‘ma was moving her lips, but no word came out of her mouth. She mouthed words to Buddy and he tried to understand what she was saying, but the levels had different languages and this ‘ma was clearly from the ‘udcot upstairs. Buddy shook his head and started to cry. His insides gave out at last and yellow water leaked out of him. He tried to back out of his corner but the ‘nekin behind him gave out and fell down. The sound alerted the monsters.

Buddy rushed out from his hidden place and crept out. He tried to hurry down the stairs, but it was even more difficult to go down than climb up. The biggest harry was now behind him. Harrys and emmas were used to this and had no problem going up and down the stairs. They were starting a chant now. Buddy had a lead of a few moments and he went back to the ‘unsun. Once in, he realized that he was now trapped. And now this beloved ‘unsun will not save him. He went back to the image of the ‘ma the harrys and emmas had preyed on and something struck him. He wanted to wait and think but he felt it in his bones that the the mob was stirring and they were calling for his life’s red.

Buddy tried to clear his mind and jumped out of the ‘unsun. The survival instincts of his ancestors that had saved humanity all those years ago kicked in. Buddy crawled out at break-neck speed. He glanced back once and saw that the pack of cannibalistic harrys and emmas were just about 20 feet away. They were large in numbers. All around them the ‘mas and ‘bas looked on. Some were sad and scared, but most had given up. Their progeny had found a way to grow stronger and if that meant giving up their own lives, then that was how it was going to be.

Buddy sped towards the exit. The unmentionable, untouchable exit door was now right in front of him. He turned back once more. The shiny white mob was now just a few feet away, but some of them faltered now that Buddy was so close to the door that kept them safe in the K1 and away from the toxic waste that was the rest of the grey planet.

Buddy held on to the latch and tried to stand. The crowd stopped. Scared. Amazed. No one had stood straight in the last couple of centuries. 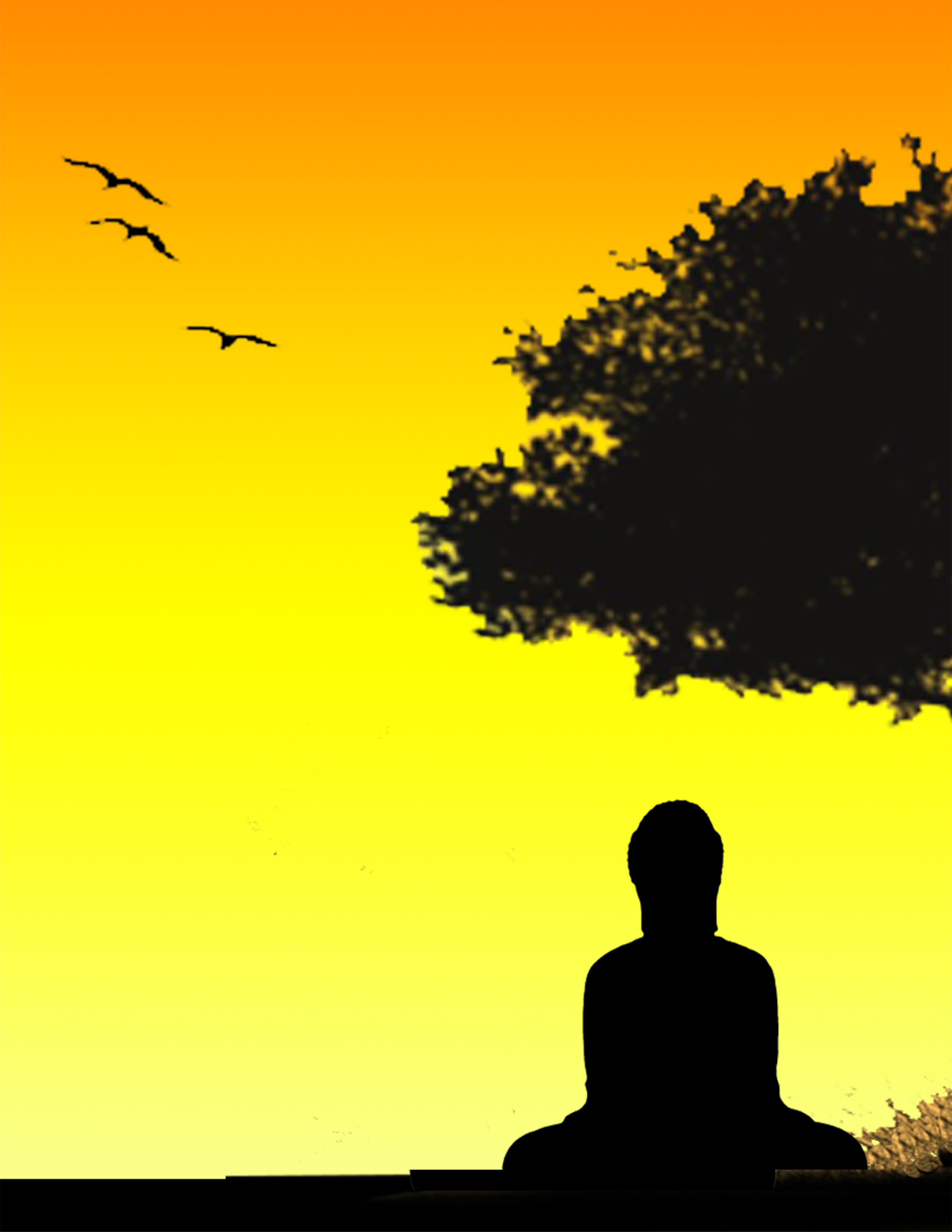 Buddy pulled himself up and with wobbly thighs and calves, he stood. Buddy now looked at them from above. The mob around him stared, pale and speechless. Buddy felt a strange relief in his back and spine. And something glowed from within. Suddenly he knew what he had to do. Suddenly he understood what the dying ‘ma had been trying to say to him. She had looked different, Buddy realized. She looked burned by the Sun.

Buddy pulled the hatch and opened the door as the crowd screamed ‘Nooooooo’, the only word they all knew across all the levels.

There was a big new tree amidst the grassy plains. The leaves shined emerald and a big silvery glow emanated from someone sitting at the foot of the tree. A crowd was gathered around the tree. Their faces were peaceful and happy. It looked like they were meditating.

The newcomer sat next to a tall boy.

“Who is that man?” He asked the boy called Harry.

“He is our savior. He saved us from ourselves. He opened our eyes to a new, better world.” Harry said.

The newcomer looked at the glowing man in front of him. A peaceful smile adorned his face.

Harry turned to the newcomer once again.

“We think his name is Budda”.