The time is 8:30 or so in the morning. We are eight of us in an open gypsy, tearing our way through the jungles of Tadoba. Summer is already way ahead here and the previous afternoon the safari turned out to be hot, humid and uncomfortable, but today the air is cooler, the jungle – peaceful and intimate, apart from being friendlier, notwithstanding the chill in our bones that an early morning cruise on an open gypsy has induced. 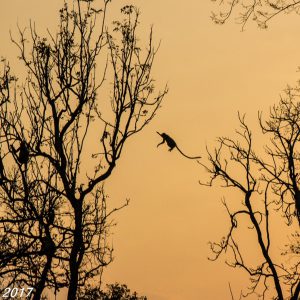 We reach a clearing and out of the blue (pun unintended), there is a nilgai staring at us – with its large ashen body it seems to be a cross between goat and deer. The safari this morning has so far been monotonous to say the least, maybe because the previous day, thanks to beginner’s luck, we had seen three tigers. 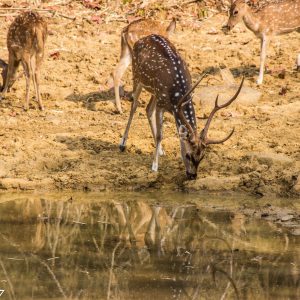 We feel let down, because frankly, one wants to see, show and tell and right now our bragging rights are at an all – time low. Our guide deciphers animal calls – he is convinced a predator is around. We spend almost an hour looking for it and then get a faint glimpse of the lithe body of a cheetah jumping from a tree before disappearing into the dense woods. 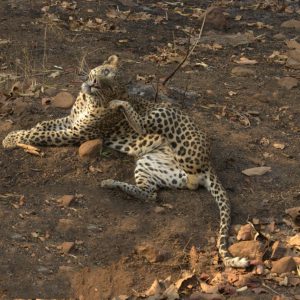 At that distance, it is difficult to tell whether it is a cheetah, but at least it is a box checked.

Then Matkasur, the reigning male tiger of this part of Tadoba and his paramour Maya, are known to have made a certain pool their haunt for the past three days and thereby increasing the odds of tiger sightings for all the grateful visitors stewing in the summer heat. However, they disappoint us by not budging from their positions on the other side of the pool where we had seen them sunning last afternoon. If it is presumptuous on our part to expect tigers to put on a show for our benefit, I doubt we realize it. We are gradually getting so accustomed to instant gratification that it is difficult to imagine a world which does not play by our rules.

The guide is now uttering platitudes – it is all luck and there is nothing one can do. We are rationalizing, maybe tigers are seen more often during afternoons. The kids are wondering what all the fuss is about, my mind is already on the breakfast that awaits us at our resort, and the husband, having long given up hope, is catching up on his morning sleep (priorities clear).

The guide, making a last attempt to make our morning worthwhile, decides to take us to a particularly dense part of the forest. As we make our way through this narrow strip of road paved by dry deciduous trees almost touching the vehicle, we know we haven’t been here before. This is the jungle proper and it’s not often disturbed by humans. We feel strangely vulnerable, because we are the interlopers here and should anything happen, the road is too narrow to afford an escape. In the silence the sounds of the jungle come alive, we are quiet, even the children, sensing this is not a world where noise is appreciated. 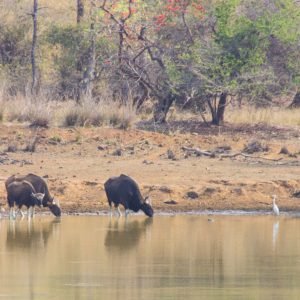 And then, a proverbial (and literal) bend in the road, a clearing, and a Nilgai staring at us, almost like a magical creature- telling us you never know what to expect here. We slow down (a couple of vehicles are parked here) and watch the nilgai as it comes to the watering hole, followed by a tiny fawn, probably seeking protection, standing by the stronger cousin. Occasionally they perk up, alert and listening, look around, and then go back to drinking. There’s a tiger around, the animals are restless and as if on cue, the guide points to a fresh pugmark on our side of the pool. We are on the right track and taking leave of the nilgai, we decide to give it a last shot.

We are again distracted, but something has changed since we saw the nilgai. We feel a subtle stirring, too faint to be called excitement, but the gloom of the morning has been dispelled. Suddenly, as if to reward our new found optimism, a tiger surfaces from one end of the woods. He is about thirty feet ahead of us, which is good I decide, because my heart is already in my mouth. The guide warns us to be silent, but he needn’t have. My hand covers my son’s mouth and I am saying my prayers as the tiger crosses the road without a single glance to us. We have almost frozen at our spot, so sudden and intimate is this encounter, but as it navigates to the other side, a few of us take out our phones and cameras out. We are overwhelmed, grateful and still reeling from the shock of the sudden encounter. We also realize that the tiger (Bajrang, an adult male) is least interested in us, which is both relieving and humbling, because we live to see another day and to realise that everything is not about us.

Our day is a success, mostly because of this majestic climax, but even otherwise, seeing the nilgai was a taste of the surreal- a moment when time seemed to have stopped, when we were outsiders being let in on a different existence.

Many people have asked me since then, what my three-year-old son felt and how he reacted. Well, he was quiet, but I doubt he registered the significance of seeing a tiger in it’s natural surroundings. He reminds me ever so often that he has already seen tigers in the zoo twice (in a been there, done that kind of nonchalant way). He was in fact more animated when he saw a hen with it chicks in the nearby village. Well, to each his own, is what I say, but boy, am I glad we were there and lived to tell the tale! 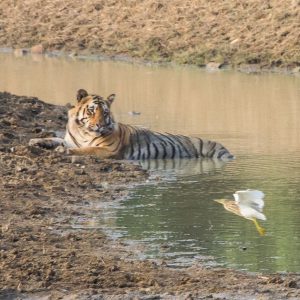