Once there lived a little girl named Emily. She lived with her grandmother on a hilltop. One day when she went to fetch some water, she saw a bird lying on the grass with one of its wings broken. She took it home and put some bandages on its broken wings. She took a box, kept some straw and cotton in it, kept the bird in the box and nursed it. When it was better, she took the box and put it on a tree near to her house. She brought some fresh fruits for the bird every day. One day when Emily and her grandmother went shopping, a thief followed them and when they were near to the market the thief snatched her grandmother’s purse and ran away with it.

At the same while, near Emily’s house a cat was walking by. When it saw the bird in the box, it jumped to reach it but instead the box fell down and the bird pecked the cat. The cat started ‘mewing’ loudly and in the meantime the bird escaped from there. When the bird heard Emily screaming, it had to help her. It followed her voice and came where Emily was and saw what was happening. It flew fast and pecked the thief hard so he fell down crying, Emily ran after the fallen thief and took back her grandma’s purse and returned it to her. Emily, her grandma and the bird came back home. 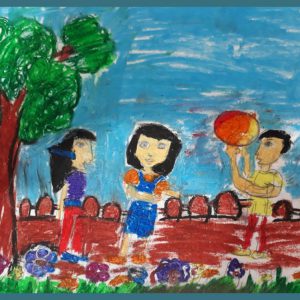 Next week Emily’s grandmother got a phone call from her aunt. She said that Emily’s cousins Jack and Marybelle were coming over to stay with Emily because there was a huge storm and their house has been blown away. When Emily got to know about this, she was very excited for she had never seen her cousins before. Her grandmother said that they were coming at tea time and she had to make the beds that evening. Emily introduced her cousins to her friend bird, and they played together the whole evening.

Next morning when Emily’s grandmother was reading the newspaper, she was shocked to find out that a precious pearl was stolen from the museum. She told Emily and her cousins about the news and they were all dismayed. Emily with her cousins went to the museum and looked around. Finally they asked the guard if they could help him guard the museum for the night, to which he agreed. So at midnight all three of them set out to guard the museum. As the night passed by, they heard footsteps inside the museum. They sprang up and pounced on the men. Marybelle offered Jack a hosepipe and they tied the men. Soon Emily found something glittering in one of the men’s pocket and took it out, and lo! It was the pearl. They kept the precious pearl in its place and left the men tied there and went back home all tired and sleepy.

Next day the guard was surprised to find two men tied inside the museum. He called the police. He was happy to see the beautiful ‘pearl’ in its own place!!! He told all about it to the journalists and the police. While the thieves were taken to the jail, there was a party held in honor of the three heroes. Soon Emily’s grandmother heard about their heroic deed. When the clock struck 12, everyone gathered around and shouted: ‘three cheers for our little heroes Jack, Marybelle & Emily’.

Salt-Sugar Solution : A Remedy For Dehydration Within …
September 22, 2017