It had been 27 years since I had visited this park. As I walked through the creaking gates of the park, every cobblestone reminded me of the evenings spent, especially during summer vacations when a trip to the Sambhaji Park in Pune was a mandatory part of the tour itinerary of relatives, visiting from Kolkata. But what I recall most was the mouth watering bhel sold at the row of stalls in an area which is still called the Chowpatty.

Bhel or Bhel puri which we all know is a popular street snack with its delectable combination of many-a-taste – crispy, soft, sweet, tangy – simply making your dil mange more. But this tongue tickler comes with an interesting anecdote that makes it stand out in the history of Indian snacks.

A Britisher, William Harold was quite an experienced chef, working for a rather successful restaurant in central London before he was sent to India to help the war efforts with his meals. It was because his dishes were so delicious that he was promoted to the post of personal cook of a high ranking officer in the British Army. One day, the officer ordered William to get the recipe of a local dish he had tasted that day. The locals had informed him that it was called bhel puri. Besotted by its taste he ordered Harold to prepare it for the troops.
Since there were hardly any written recipes in India back then, with the womenfolk in each household orally passing on their culinary secrets to the next generation William decided to go on foot, moving from house to house, knocking on their doors, in order to find the exact recipe of bhel puri, which, even today, remains quite a complicated one. At every house he went, he got a different version of the recipe; a different spice to sprinkle on top of the potatoes and the puffed rice – seemingly the only  two ingredients that remained constant in the dish – and another variety of oil to use.
After a long day of inquiries but completely futile since the poor cook was unable to find a stable recipe for the wonderful snack, he returned to the barracks, beaten and amazed by the variety of recipes he had managed to pile up. Seeing the cook, the officer asked if he would serve the first portion of bhel puri that night, but William told him he couldn’t get the exact recipe and with a pinch of sarcasm stated : “We will have to stick to French fries again tonight, Sir!”

According to the popular version the officer, went completely berserk in fury, took out his handgun and shot William dead, sparking off an uprising  among the soldiers, who were both fed up with the officer’s callous attitude and totally in love with William’s heavenly cooking. That’s how a small bowl of bhel puri (or should I say the lack of it) shook an entire British barrack and caused a mutiny in the ranks of an otherwise extremely disciplined force. Not even apprehensions of a court martial could pacify the mutinous soldiers.

Unlike poor Harold we, nowadays, do know a more or less perfect recipe of bhel-puri. This tasty snack is a delectable mixture of puffed rice, crispy fritters made from roasted chick pea flour, onion, tomatoes, raw-sweet mango, boiled potatoes, roasted groundnuts, amply aided by sweet and sour chutneys which lend an especially agreeable tangy taste. The mixing of bhel is a peculiar art which requires much effort and skill. Indeed, only a handful few are lucky enough to attain perfection in this field. The ingredients must be combined in proper proportions. A little too much of the one or a little too less of the other, may rob the mixture of its magical taste.

Over the years, this key member of the chaat family has migrated all over the country, attaining popularity albeit through different avatars; Bhadang in the Gucafes of Gujarat, Jhaal Muri is the Kolkata variant while Churumuri represents the native Mysore variant. Moreover, online retailers are currently taking this favorite snack of India in the form of ‘ready to eat’ packs  across the borders. 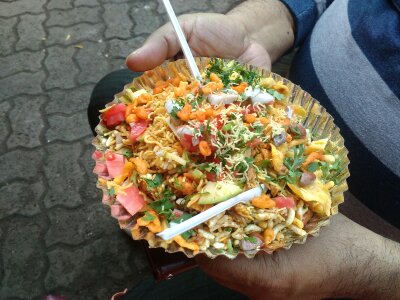 Seated on a tottering bench which has clearly seen better days, at Poonam Bhel Puri Walla, illuminated by the dim lights of Sambhaji Park, I dug into this delightful snack, eager to taste the first spoonful while pondering over the tragic end of William Harold and the small bowl of bhel puri that had nearly sparked off a mutiny. Perhaps, this is the perfect testimony of the passions that the humble bhel puri spark off among its die-hard fans.

Although the English chef failed to get a standard recipe, we have managed to get one for you which fairly resembles the original recipe of Bhelpuri. Enjoy the taste of this famous snack.

Recipe for Bhel Puri (for 4 servings):

Divide the mixture into equal portions and garnish each portion with sev, crushed papris, chopped raw mango pieces, coriander leaves and a papri that doubles up as a spoon.