The bustling main road, when observed from above, resembles an irrigation canal with numerous lanes branching out. Each lane feeds the central road with human and vehicular movement which shapes its image of being one of the major thoroughfares of the city. In its entirety, this aerial view is nothing extraordinary. After all, almost every urban setting would look the same at a casual glance.

Pause awhile, look closely at each of these lanes and a very different vista opens up. For just as each channel of the main irrigation canal could be watering a different crop, each lane has its share of stories to tell – those of its inception, its inhabitants and its varied appearances over the ages. Today, our exploration leads us to Twelfth Street which seems unusually deserted considering its location within the city. The lane is narrow and reaches a dead end after only a few hundred meters. Adjoining the wall, signifying the dead end stands the “Rainbow House.”

Take a look and the name comes across as a joke, for the rainbow house has no semblance of color anywhere. The crumbling walls, covered in decaying moss, appear closer to black than brown, thanks to urban pollution. Look inside and the faded, peeling paint of the rooms appear a dirty, sickly white. The gates have been removed long back and an ancient signboard pathetically displays the farcical name while swinging mildly in the breeze from its pegs.

Look closer still and it is this signboard which appears to be the only element in the dilapidated house which could have once been colorful. For the seven letters of the word “Rainbow” seems to have been painted in the seven distinct colors of the spectrum. It’s hard to spot them now barring careful scrutiny but if you are so inclined, you might also catch the fact that the colors on some letters have faded more than others – a finding that would lead you to conclude that the text on the signboard lost its lustre one letter at a time.

What’s the point of this exercise, you ask? Well, we have come to listen to this ancient house tell a story before it gets pulled down to make space for a high-rise. However, before the structure follows the colours into oblivion, it wishes to leave behind a legacy. A story, which defines its inception, journey and gradual descent from glory to desecration.

This morning, a middle-aged man walks into the ruins of the house. As you observe the way he looks around and moves, you realize this is someone who knows the house well. Look into his eyes and see them zoning out, moving about and focusing again. Obviously, looking for something specific and puzzling over the lack of familiarity.

The man walks around the house and enters the garden. True to the present condition of the house, the garden is a mess of weed, dead leaves and branches. The man’s eyes seem to flicker and focus on something distant. Not a sight but a memory. A vista of the garden when it was alive, fragrant and beautiful.

“I must find my tree,” the man murmurs to himself and looks around. Fixing his gaze on a corner of the garden, he walks briskly to the crumbling walls. Arriving at the spot, he kneels and forages through the thick overgrowth of weed till his hands touch something familiar- the stump of a palm tree which had been chopped down a few months back in preparation for the high-rise to take over.

The man’s eyes moisten as memories come flooding back. Memories of almost 40 years back when, as a kid, the tree had borne 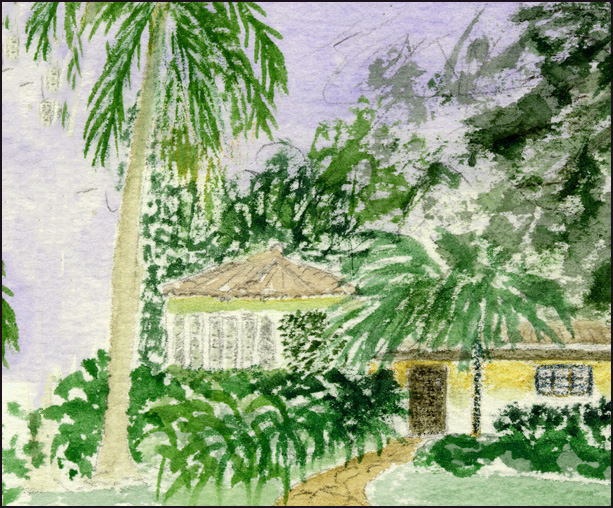 fruit for the first time. It was planted by his father and grew up to be a symbol of his childhood. Whenever a discussion ensued about his life and ambition, his father would point to the tree and tell him, “Alok, look at that tree, how it grows taller and taller every year, surpassing everybody around it. You have to aim to be that tree. Outshine all your peers, stand taller than everybody by dint of your achievements and capabilities.”

As young Alok stood looking up at the tree, the initial feeling was that of jealousy and resentment. “Why do you grow so fast? How am I ever going to match you in the sheer pace with which you leave your competition behind?”

The tree seemed to nod and a gentle breeze would blow over him, soothing his mind. As he sat in its shade, Alok would talk to the tree like a companion, sharing his thoughts, fears and plans. The tree, ever patient, ever listening, would envelop him in its gradually expanding shade, seeming to protect him from all his worries.

With the years rolling by, Alok had to deal with his family falling apart. The growing arguments between his parents resulted in them going their separate ways. Alok’s dad – a picture of confidence and composure at one time, broke down at his failure to hold things together. Perpetual depression led to despair and culminated in the moment which saw his father eventually take his own life.

Through these bitter moments, the anchor which kept Alok’s spirit strongly grounded was his only true companion – the palm tree. The steady stream of human misery, betrayal and ill-will had shaken his faith on human bonding. The tree was strong, yet gentle, silent, yet understanding, aloof, yet comforting in its embrace. As Alok sat crying under it, the tree seemed to whisper to him about all those violent storms it had been through. How it had braved their attempts at uprooting it and continued to stand tall. Looking up at it, Alok drew strength and the resolve to be the spirit it exemplified.

Today, as Alok looks down at the stump, an overwhelming sensation of the end of an era washes over him. He sits down, acutely aware of the missing shade, when a familiar whisper catches his ear.

“So you finally managed to stand taller than me!”

Alok smiles, “ Are you jealous? Like I used to be in my childhood?”

“No. To see you imbibe the values I stood for is the greatest gift ever. In these final moments of my existence, I am happy that you weathered all the turbulence life had to throw at you and emerge victorious. After being through so much sorrow, this place will be finally at peace knowing the last surviving legacy is a success story.”

Alok says with a distant look in his eyes, “I was afraid I wouldn’t find you. There’s nothing familiar around here any more. Remember, the ‘Rainbow House’ in all its glory? We used to say, all the colours which decorate our lives have come together in this house. It’s no stranger to any emotion.”

“That it’s not. As the people left it, the colours faded. But today, after many years, I think I see a colour spreading across the horizon and painting this picture. Do you see it?”

Alok nods and leans against the stump, closing his eyes and hoping for the cool, comforting breeze which always greeted him at that spot. As dusk approaches, we zoom out of this scene and take in the cityscape again. The sky, the buildings, the streets and the lives they shelter appear awash in a single colour while the sun goes down.

Red – the colour of our will to survive!