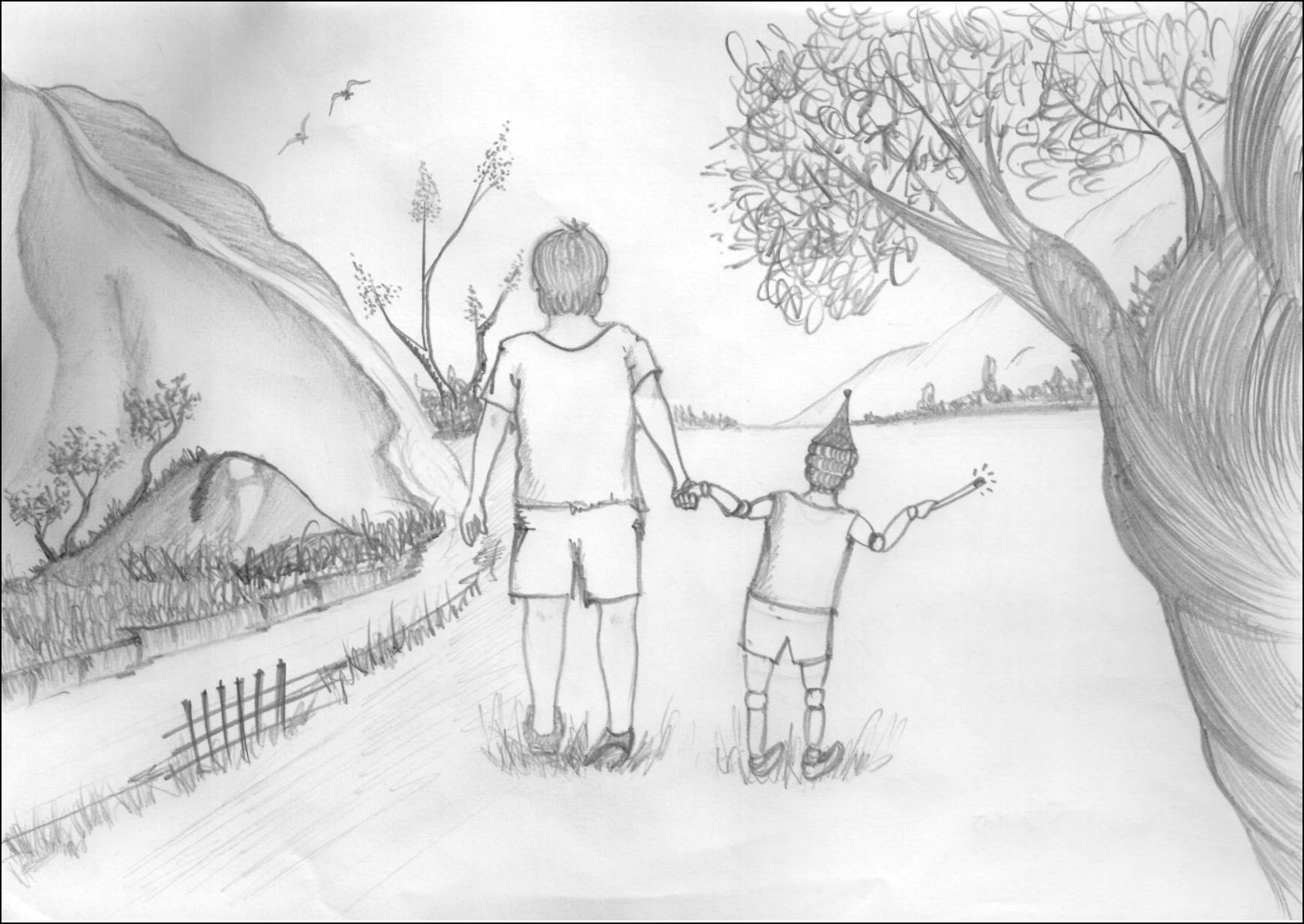 There’s nothing like a place full of life which suddenly changes to personify death itself.

The ever-bustling market presented such a picture this morning. The air was thick with smoke which bore the stench of death and carried the helpless wailing of humanity far and wide. Posters on the wall advertising the latest cinematic release were half burnt. Crumbling walls in desperate need of paint were splashed with a fresh coat of blood as victims of the bomb blast lay strewn around like discarded leaves. Some attempted to move, only to find the limbs which aid movement were gone. Some sat and stared in a daze, too stunned to assess their injuries, trying to come to terms with the tragedy that was forced upon so many lives.

Ambulances sped in and screeched to a halt. Medics ran around attending to people and stretcher-bearers carried victims away. The police kept a close watch on proceedings and were busy keeping onlookers from interrupting the rescue work.

It was over in a few hours. The injured were ferried away to the nearest hospital, the dead, packed like cattle were transported to mortuaries where they would be disposed of post identification. Free of official obstacles, residents entered the market to survey the damages to their livelihood.

In this suburb of Karachi, blasts appeared an eventuality which many were prepared for. Having seen a number of them over the years for reasons best known to the messengers of death who perpetrated them, a resident of this decrepit locality had learnt to say an extra prayer whenever it occurred, to thank the lord for sparing his/her life and carry on with business till the next one came along. Life teaches us that it always comes with a full-stop. However, to these residents, it also taught that the full stop could be placed just as a sentence was beginning or in the middle of it, cutting it off abruptly.

Meanwhile, 9-year-old Arif wandered through the market looking at the wares strewn around. His dad ran a shoe repairing shop which had managed to evade the impact of the blast. With his parents helping others overcome the disaster, Arif had set out to check on his friends and their families.

A mannequin suddenly caught his attention. It was that of a magician wearing a colorful robe and felt hat, brandishing his wand. Amidst all the burnt, trampled-upon and broken goods, the mannequin appeared brand new. The magician’s winning smile defied the pall of gloom, his sparkling eyes stared straight at Arif.

That evening as Arif and his family said their prayers and readied themselves for bed, the magician stood on a bedside table, close to Arif. His parents were initially apprehensive about bringing it home but preferred to say nothing as they hoped it would cheer their son up on a day when he learnt that three of his friends would no longer be with him at school and in the playground.

It appeared to be a dream when Arif heard his name being called in the middle of the night. However, the persistence of the voice woke him up to the fact that it was not. Arif looked around but there was nobody in sight. His parents were fast asleep beside him. Their faint snoring coupled with the crickets outside were the only things he could hear for a few minutes.

And then it sounded again, “Arif”

It was a deep, rich voice, yet not loud. To Arif, it appeared that it was meant for his ears only. The direction of it made him look at the bedside table and he gasped!

The magician was standing in his usual pose, however, the magic wand was no longer pointing upwards. It was directed at him!

“Arif”, said the magician. “Don’t be scared. I have something very important to show you”

“You can talk!” exclaimed Arif. “Like one of those rich men’s’ toys”.

“Hey, I am a magician, remember? Now extend your hand”

Arif did as he was told. The magician tapped his palm with his wand and instantly a view of a glorious place appeared before him. A majestic vista of tall, snow-clad mountains, pine trees, shepherds taking sheep and mountain goats for a stroll and streams brimming with cool, clear water.

Arif smiled. For the first time that day.

“Where is this place?”, he demanded.

“In this country”, smiled the magician. “Far away from where we are now”

And thus it continued. Every night, after Arif’s parents fell asleep, the magician would show him something new of the beautiful place. The trees, the flowers, the way to get there. After tiring days involving school, housework and helping his father at his shop, the nocturnal sojourns were a refreshing release for the little boy who had hardly been anywhere beyond the boundaries of his town. To him, the existence of such a place was a dream come true.

Then came a night which changed it all.

The magician appeared disturbed that night. He was tapping on Arif’s palm with his wand as usual but could not get the vision to appear.

“What’s wrong, Daanish?”, asked Arif. The knowledge he gained from his toy reflected in his choice of a name for it.

“We are in great danger, Arif”, said Daanish, the magician. “I can’t show you what you want to see as another vision is suppressing it. I didn’t want to reveal this but now I am afraid I must.”

“The events which led to you finding me in the market. Look!”

Daanish tapped Arif’s hand with his wand. Instead of the paradise he was accustomed to seeing, a view of the market appeared before him”

“The market looks different! Majid uncle’s shop was destroyed in the blast. He and his family were killed.”, exclaimed Arif.

“This is the day of the blast” said Daanish in a grave voice.

Arif looked on as a girl, roughly of the same age as him, entered a toy shop with his father. Looking around in anticipation, her eyes gradually settled on something.

“See something you like beta?”, asked her father, smiling fondly at her.

“Umar bhai”, the shopkeeper greeted him. “Buying something for your daughter?”

“Yes. She came first in her class at the annual exams. I promised her a gift if she did well”

“Masha’Allah!” exclaimed the shopkeeper. “Your daughter will make you proud one day. I will give you a discount on whatever she chooses to have”

“That’s what I want”, the little girl said. She was pointing at a mannequin of a magician, wearing a colorful robe and a felt hat. His cheerful smile gave him a debonair look.

Wrapping the toy in a parcel, father and daughter were ready to leave when the shopkeeper picked up another packet.

“Umar bhai, would you be so kind as to take this parcel and drop it in the post box across the street? My assistant is absent today and I can’t leave the shop in the middle of a busy day such as this. It’s a toy ordered by my brother-in-law for his niece.”

“Certainly”, smiled Umar. Clutching the parcel in one hand, he held his daughter’s hand in the other as he left. The little girl appeared super excited. Walking with a spring in her step.

As they left his shop and mingled in the crowd, the shopkeeper picked up a device which resembled a remote control. He watched intently as father and daughter approached the center of the market which was the most crowded.

Then he pressed the button.

A deafening sound made Arif block his ears with both hands, a ball of fire erupted from the centre of the market as a shockwave spread outwards-destroying everything in its way.

The vision disappeared. Arif was shaking, his mind taking him to the scenes after the blast, a month back.

“The time has come for us to leave. Towards the “jannat” which you have been seeing every day”, said Daanish.

Unbeknownst to his parents, Arif walked out of the house holding Daanish in his hand. He walked through the market, past the houses in the small town as his neighbours slept peacefully, leaving his erstwhile life behind, guided by Daanish towards the mountains and the spring.

He was far away as another blast rocked the hapless town the next morning. It wasn’t kind to Arif’s parents this time around. Their shop was blown to smithereens and both of them had the full stop placed firmly in the middle of their sentences of life.

As the familiar cloud of death engulfed the town, Arif was walking steadily away from it all. To a place where a toy could be a child’s friend, instead of a messenger of destruction.